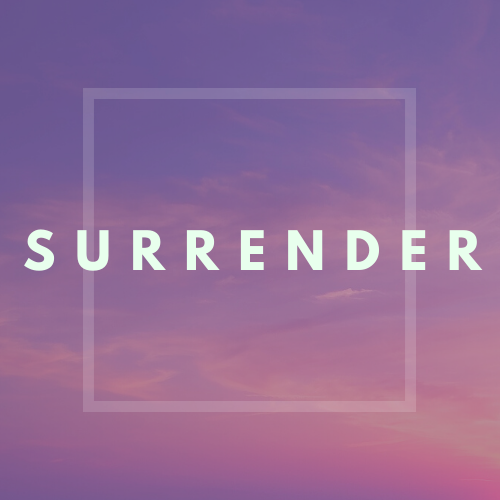 Last week I shared three obstacles toward surrender by reflecting on the Israelites fear of entering Canaan. Even though the Israelites were being offered an amazing gift, they were still unable to be obedient to God. In contrast, Jesus remained obedient, even when he was being instructed to submit himself to pain and suffering. Today I’ll be discussing how Jesus prepared himself to choose surrender so that we may learn from him and follow his example.

In the last hour before his arrest Jesus gathered his disciples to watch and pray with him. In Matthew, he is shown returning to them frequently in between his alone time with the Father. Although the disciples themselves were unable to remain alert, Jesus himself chose to keep his friends close. “My soul is overwhelmed with sorrow to the point of death. Stay here and keep watch with me” (Matt. 26:38). Even Jesus himself needed the support of others in his hour of temptation.

I’ll confess that this is not a strength of mine. In the face of hardship, I prefer to isolate from others. On my darkest days the last thing I want is to be around other people, but I’ve come to learn that these are the days when I need others the most. Good safe people offer us encouragement, accountability, and comfort. Sometimes it is as simple as sitting in silence, but the key is to not be alone.

Jesus spent at least an hour praying in the garden. In fact, he is recorded praying the same prayer three times and he instructs his disciples multiple times within the hour to pray with him. “Watch and pray so that you will not fall into temptation. The spirit is willing, but the flesh is weak” (Matt. 26: 41). What is remarkable about Jesus’ pray is that he is confessing to the Father that he doesn’t want to surrender.

The reason this prayer is remarkable is because Jesus himself was dependent on the Father to strengthen him. How much more then are we dependent on God? Prayer is our direct link to God and we cannot surrender to God without it. There is no shame in confessing our struggle because God in the form of Jesus experienced the same struggle. So pray.

In order to fully surrender to God we must also overcome temptation. The disciples drifting off to sleep offers a beautiful metaphor for the sneaky nature of temptation. When someone is wide awake and alert it’s easier to identify subtle dangers. The person is quicker to act and avoid the danger. In contrast someone who is tired and disengaged may not recognize the danger until it is too late.

The disciples failed to recognize Jesus’ distress. If only they had paid more attention they might have realized something bad was about to happen and prepared their minds and spirit. They were unprepared for the upcoming trial and consequently all of them fled in fear. Jesus in contrast was well prepared, so much so that he willing offered himself up to suffer. He had completely and utterly surrendered himself to God’s will.